It now (July 2019) seems this wheel is not  nearly as unusual as I thought. More here.

At the 2019 Creative Fibre Festival recently, I watched the Fashion Parade. There were many stunning garments  and I should have been paying close attention. But there was also a spinning wheel, at the far end of the runway beside the commentator’s lectern. I was fixated and frustrated, trying to see it properly.

Afterwards, seen from closer to the stage, the wheel was clearly a Rappard Northern European – with 16 spokes! I knew of one other, but only had a couple of small photos of it. So it was out with the camera and notebook. 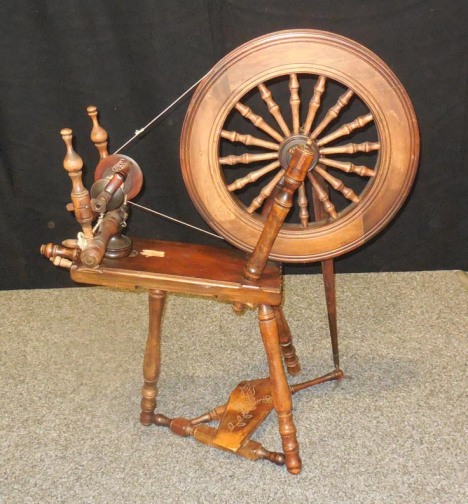 The turning is nicely detailed, but it has a sturdy, almost peasant feel. Northern Europeans are  quite different from the graceful simplicity of the Rappards’ later Mitzi, and this one has more detail than the ones we usually see.

Comparing the turning, from the feet to the maidens to the drive wheel, the usual 8-spoked model is simpler almost everywhere.

One thing all Northern Europeans I’ve seen have in common is the unusual construction of the drive wheel. It’s like this:

which would have been made by joining four pieces of wood like this and then cutting out the circle. It might be easier than the more usual method of making matching segments, but it means that end grain of the wood is being attached to lengthwise grain, which can be tricky. 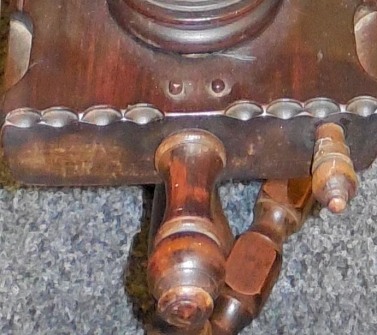 There are two little retaining pins to stop the tension screw from screwing right out. Two seems a bit like overkill.

You may have noticed the unique design on the treadle. 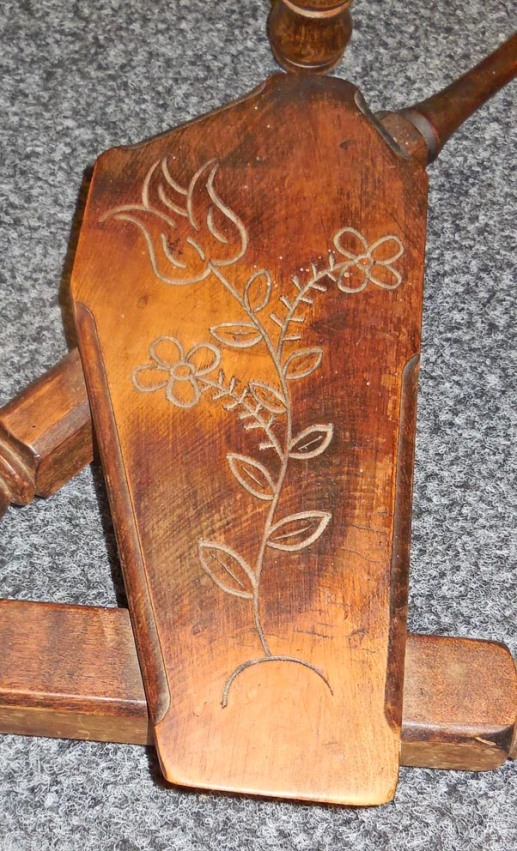 It’s far more elaborate than any we’ve seen before. Did Maria design it for someone special?

Then I peered underneath, and found, not the usual Rappard name and numbers, but this:

– JR (John Rappard), 77 (presumably 1977) and two lines with an arrow through them. He put similar mark on just one other wheel that we know of, the one below with its charming little finials between the spokes.

Its treadle motif is the rosette, one of the standard ones, but underneath is this –

It’s marked (19)73, so it’s a really early Rappard, and it has three lines pierced by the arrow. Was the arrow symbol perhaps used on wheels which were made specially for a particular person?

And what does the symbol mean? Rex Chapman-Taylor (son of the famous craftsman-designer James Walter Chapman-Taylor, who did not mark his work) used an arrow mark on items of furniture he made (this example is on a chair):

It looks like a sign of Sagittarius, the star sign of the Archer, and Chapman-Taylor senior was very interested in horoscopes. But neither he nor his son Rex was a Sagittarian, and nor was John Rappard,  – all three were born in June. So the arrow and slash(es) mark remains a mystery.

Later I learned a little about the wheel’s history. It had belonged to Betty Healey, a colourful character who was much loved by her fellow members of the Dannevirke Spinning Club.  Longtime members still remember her with affection, and remember her big spinning wheel, though she was actually more of a weaver. it’s not known whether she had owned it from new. It ended up in a shed, but was found by her son and has been given to the Manawatu Spinners and Weavers Guild. 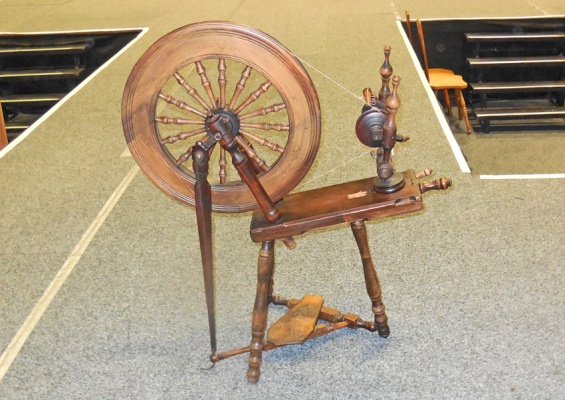 The wheel has some visible history. That mark in the middle of the table is actually a very rough hole which goes right through. Apparently at some point someone tried to add an electric motor to it. But that’s no reason why it shouldn’t still be a good spinner.

3 thoughts on “A unique Rappard wheel”